By Gonçalo Marques
java spring tx
In this tutorial you will learn about the transaction isolation level provided by the Spring framework.

Isolation level in a transactional method

READ_UNCOMMITTED isolation level states that a transaction may read data that is still uncommitted by other transactions. This constraint is very relaxed in what matters to transactional concurrency but it may lead to some issues like dirty reads. Let's see the following image: 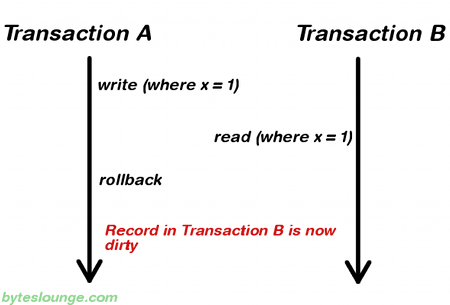 Note: READ_UNCOMMITTED is also vulnerable to non-repeatable reads and phantom reads. We will also see these cases in detail in the next sections.

READ_COMMITTED isolation level states that a transaction can't read data that is not yet committed by other transactions. This means that the dirty read is no longer an issue, but even this way other issues may occur. Let's see the following image: 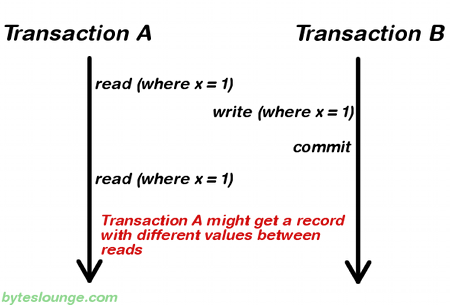 Note: READ_COMMITTED is also vulnerable to phantom reads. We will also see this case in detail in the next section.

REPEATABLE_READ isolation level states that if a transaction reads one record from the database multiple times the result of all those reading operations must always be the same. This eliminates both the dirty read and the non-repeatable read issues, but even this way other issues may occur. Let's see the following image: 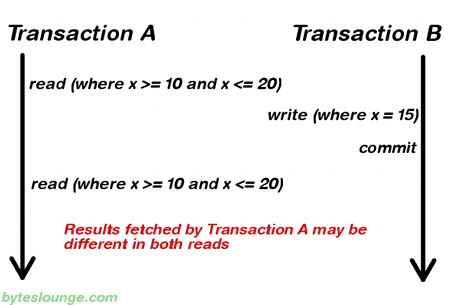 SERIALIZABLE isolation level is the most restrictive of all isolation levels. Transactions are executed with locking at all levels (read, range and write locking) so they appear as if they were executed in a serialized way. This leads to a scenario where none of the issues mentioned above may occur, but in the other way we don't allow transaction concurrency and consequently introduce a performance penalty.

To summarize, the existing relationship between isolation level and read phenomena may be expressed in the following table:

If you are using Spring with JPA you may come across the following exception when you use an isolation level that is different the default:

To solve this problem you must implement a custom JPA dialect which is explained in detail in the following article: Spring - Change transaction isolation level example.

About the author
Gonçalo Marques is a Software Engineer with several years of experience in software development and architecture definition. During this period his main focus was delivering software solutions in banking, telecommunications and governmental areas. He created the Bytes Lounge website with one ultimate goal: share his knowledge with the software development community. His main area of expertise is Java and open source.

He is also the author of the WiFi File Browser Android application: